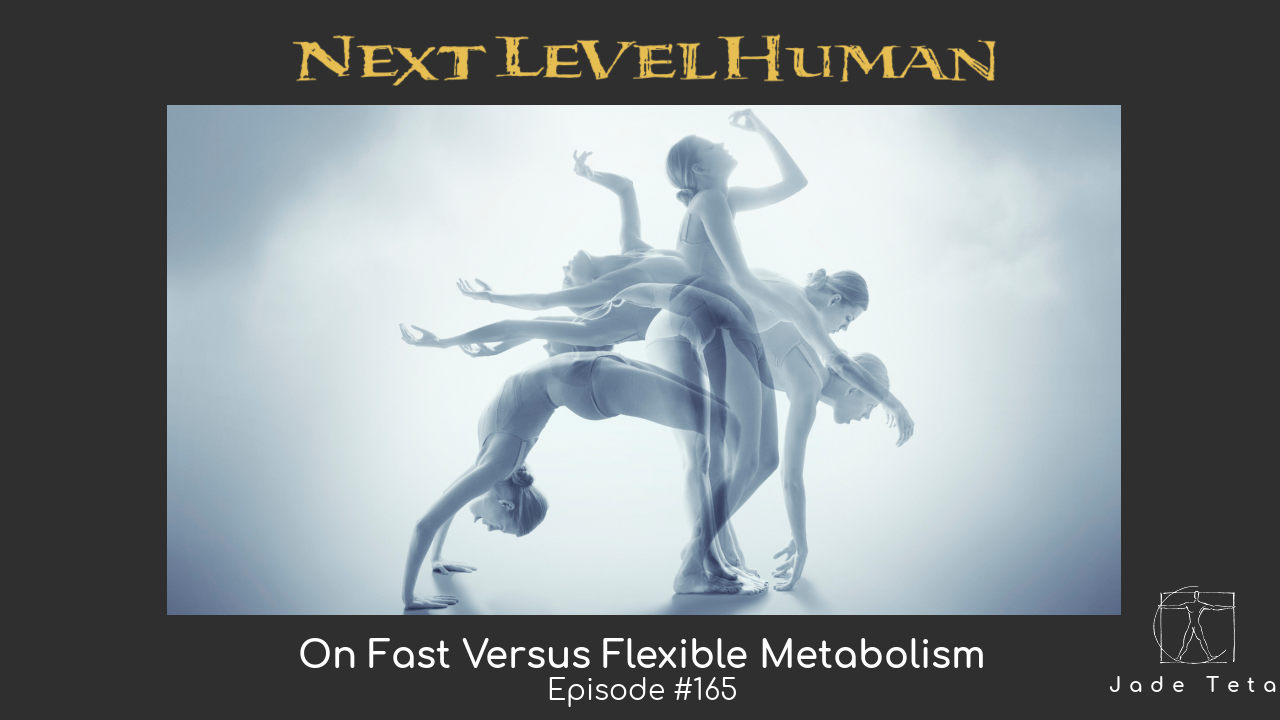 On Fast Versus Flexible Metabolism – Ep. 165

In this episode of Next Level Human Podcast, you will learn all about the differences between fast and flexible metabolism. While it’s more beneficial for you to have a flexible metabolism when it comes to body recomposition, you might influence a specific type A or type B metabolism by following specific tips. The best way to follow along with what your body is prone to do is to know what works for you.

Dr. Jade talks about several factors such as exercise, diet, cardio, mood, stress levels, and energy that can – and will – influence how your metabolism operates. Some actions like having a diet filled with nutritious macronutrients (especially protein), having an optimized strength training program (rather than doing cardio every day), and managing stress levels (paying attention to sleep quality, for example) are examples to turn your metabolism into a flexible and strong one. Tune in!

[06:50] now, if you could speed up metabolism, without the compensatory changes in hunger, energy and cravings, then perhaps that would be beneficial. And so what we really want is we want a flexible, adaptable metabolism a metabolism that does not have increased hunger, energy and cravings in response to adaptations, stresses, like exercise, cold exposure, fat burners, hormone replacement, therapy, et cetera. So you don't want a fast metabolism, you would rather have a flexible metabolism. But it would be great to have both, wouldn't it? And so what does it mean to have a flexible metabolism? Well, what that means is it means that you are no longer looking at metabolism as simply a calorie counting mechanism, but rather an adaptive reactive stress thermostat. The metabolism is best described in my mind as a stress barometer, and a stress thermostat. In other words, what the metabolism is doing at its basic nature is sensing and responding to stress. What people don't understand is that yes, eating too much and exercising or moving too little is a stress. But so is the other extreme, eating too little. And exercising too much or moving too much can also be a stress. And so what we want to get a flexible metabolism. This is not genetic, when we talk about, you know, metabolism, we don't necessarily mean you know, when we say fast and slow, a lot of people say well, she's just genetically got a fast metabolism, he's genetically got a fast metabolism. And sure, there's going to be some genetic component here with the flexible, flexible component of metabolism. But it is very easy to do things in your lifestyle to give you a more flexible metabolism. Now a couple episodes ago, we talked about the idea of building muscle in this multitasking aspect of trying to build muscle while burning fat or burning fat while building muscle trying to do both at the same time. This discussion on fast versus flexible metabolism goes back to that discussion, to basically say that we can use certain things to make the metabolism more flexible. So how do you how do you make exercise not cause compensations in stress? Well, if you think about stress, the way the body handles stress, we know that stress that is short lived is better than stress that is very long, right? So if you're going to do something stressful, you want it to be shorter, the body does really well with extreme stress only if it is short in nature. Right? It will have less compensatory stress reactions. If the stress that you're subjecting the body to is short and extreme. It also does really well with very low intensity, longer duration stuff like walking. So when you're thinking about exercise, you want to probably be thinking about short intense workouts or long At low intensity movement, this is why walking and resistance training and high intensity interval training and shorter duration workouts might be better than doing this traditional way of thinking about things where we go out and run for 60 to 90 minutes on a jog. Now, again, certain amount of people 25% do well on that 10% do really well on that, but the rest of us 75% do not. And so what we want to be thinking about is we want to be thinking about making our metabolism more flexible through choosing the right types of exercise. So rule number one with exercise, then if you know you're someone who compensates like this, and ends up over eating in response to exercise is to do shorter, more intense exercise. Also to realize that resistance training is probably going to be better than cardio. Because of the mechanisms by which it works, it helps to increase liver, insulin sensitivity, as well as muscle insulin sensitivity. And this is slightly different than cardio based on several lines of research, something happens with the muscle molecules that are released with resistance training. One recent study actually shows that when you do intense resistance training, you release, basically these little messenger RNA molecule vesicles, from the muscle that go to the liver that tell the liver to process sugar better. This is different than cardiovascular exercise. And maybe one of the reasons why we can see with resistance training, you get this sort of insulin resistance benefit in the liver and the muscle, whereas cardio, you may not. Also with resistance training, you're releasing more human growth hormone and testosterone along with cortisol. Whereas with cardio, you're probably releasing a little bit more cortisol and less human growth hormone and testosterone in most cases. Likewise, there is some research that hands resistance training has less of an effect on hunger and cravings compared to cardio. So this tells us that we can make a general rule of trying. Of course, we're all different of going to short, intense resistance training based workouts to make exercise a less stressful thing on the metabolism. So there's less compensation and to give the metabolism more flexibility.

[12:16] Now when it comes to diet protein serves the same role. So you can see the theme we talked about several episodes ago, comes back here again, why does protein help the metabolism be more flexible, because protein is a flex fuel plus it is an infrastructure building block in the body. So the body basically can use protein to make glucose it can use protein to make ketones and it uses protein preferentially to repair the body and make collagen and make tendons ligaments, make muscle tissue, build all the cofactors and enzymes needed for biochemistry machinery that goes on every single day. And so once again, now we can essentially say okay, if we want a flexible metabolism, what exactly does that mean? If we're doing resistance training, and getting plenty of protein, and we're making the metabolism more flexible through this, and also doing tons and tons of walking, which also makes the metabolism more flexible. Why? Because again, it's sensitizes the body to insulin, it lowers cortisol, and it has less of an impact on hunger and cravings. And so ultimately, we know that we don't have a flexible metabolism when we are always hungry, always craving always compensating anytime we try to speed up metabolism. If we do these things move to short duration, high intensity resistance training, lots and lots of walking, making sure we're getting our protein on board, preferably especially if you're trying to build muscle or maintain muscle while burning fat. One gram perhaps as much as one gram per pound of body weight is what would be required here. Then when we speed up metabolism, we also will have more flexible elements in place so that we do not compensate by wiping out what we just did. Think about a workout that burns 500 calories, that then causes you to over consume 800 calories or to eat 800 calories is not a great idea. What you want to be doing is you want to be doing workouts that don't cause you to overeat, that don't cause you to lose motivation that don't cause you to have cravings. This is what we mean by a flexible metabolism. Now, if you have a flexible metabolism, then speeding up metabolism can make some sense. So hopefully this is making some really good clues for you or giving you some really good clues as to how to approach this.