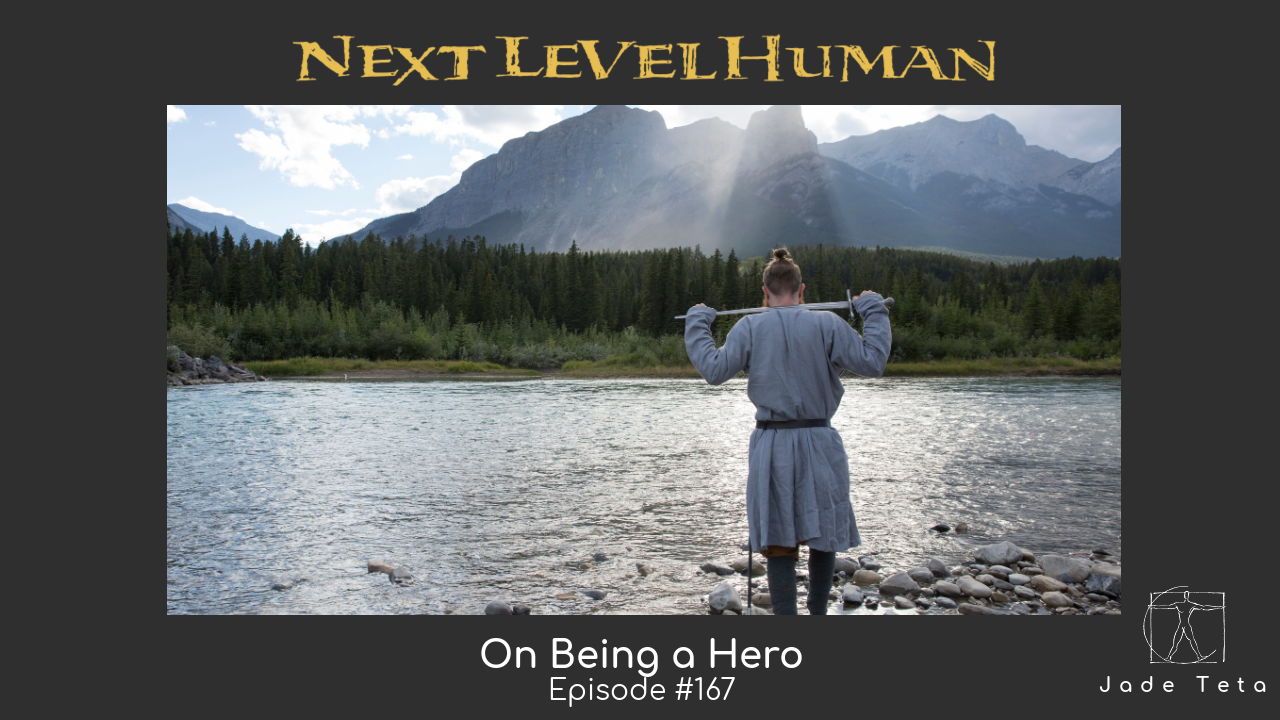 In this episode, Dr. Jade talks about the dynamics of being a hero every day. We all go through a journey in life where we find ourselves having to prove we “can do it” all the time. Also, human beings deal with problems constantly, are constantly feeling pressure from the external environment, and sometimes face extreme difficulties such as being on the streets, having addictions, suffering abuse, etc.

Making a parallel with a personal story, Dr. Jade questions what is like to be a hero, what it means to be a hero, and how to recognize the virtues of one. The things that happen to us – the good and the bad – make us a victim or a hero and we have the opportunity to choose which one we will embody. Life can take us on tortuous paths but it’s important to remember that wherever we are, there is always a chance to be a hero, right?

[40:25] Now to wrap this up, what's really interesting is then I said to Jordan, what is your advice to me, and you know what he did? Now, I don't know if it if he was even aware of it. And I'm not gonna say I caused it, I'm just saying it was just so interesting to me. He proceeded to give me the insight, he turned his whole situation around and what he said, as he goes, the advice that I would give to you, Jade is that all the things that you think you need in your life, all the materialistic things, your car, your home, you know, your dog, you know, all this stuff. He goes, I don't have any of that stuff. All I have is my bike in my backpack. And, you know, he had like a little, a little radio, and in a water bottle, he's like, that's all I have. And he goes, and what I've learned is that I don't need anything else. And I'm still surviving. And there are times that I still can feel like and laugh and have joy and whatever. And he and it was really amazing to me that he started speaking to me almost like I was speaking to him. And it also dawned on me, it's like Jade, while you're not talking down to him, you still have this mentality that you're better than him, that you're more educated than him or whatever, because of my language. And then he starts talking to me, like a philosopher, and like somebody who's like, given me like, just pearls of wisdom and things that I'm just like, Damn, dude, like, you're right, I'm too attached to a lot of my stuff, I don't need all this stuff I can survive. The things that are important is that I can laugh and find, you know, presence in beauty and just sitting with nothing and not having to worry about that stuff. And here's a guy who's lived that and he's telling me that. And so in this roundabout way, he gave me the most beautiful, tangible lesson that I can then take back with me and I was just charged up. It's kind of why I'm doing this podcast. Now my sister in law, my brother are staying with me here and I immediately came back and told him oh, my God, man, I had the most beautiful encounter with this homeless guy and I'm just feel charged up for it and better for it. And it was just this beautiful connection point. And that's what I really want to leave you with, I want to leave you with, like, we have the ability, even when we're out on the street, and to find a way to jump past victim and get into hero. And when we get into Hero mode. And this purpose driven way of looking at life and setting are tasked to solving the pain around us. Rather than just complaining and blaming and saying me, me, me take care of me, then we can do beautiful, powerful things in the world. And it dawned on me that that is the next level human path. And the degree to which we can sustain that is the degree to which we are more or less next level humans in the way we show up. And so that's what I want to leave you with? And I guess I would say, think about it, because I'm going to do it to like what can we do as humans? What is going on with you right now your pain and suffering? I know you've got it. I know you got some going on in your life or something from the past that you're still not over? How can you take that pain and situation and turn it into something powerful and be the hero for yourself and others. And the final thing I'll say about hero, just remember, don't make this mistake. A hero is someone who does for self. And other a base level human is an extreme individualist. It's all about me, I don't care about anyone else. Everyone needs to pick themselves up by their bootstraps. A culture level human says I'll help the people who believe what I believe a next level human goes I will help myself and other. Right. And that's what, you know, I've been thinking about writing about and, you know, have been having in my mind the last couple weeks or so. And I was excited to learn from Jordan and be able to also pass on some lessons to Jordan. And I hope that this episode has helped you also to think about and change your mindset perception around the victim state and the hero state. All right, everybody. Thanks so much for hanging out on the next level human podcast and I will see you at the next episode.