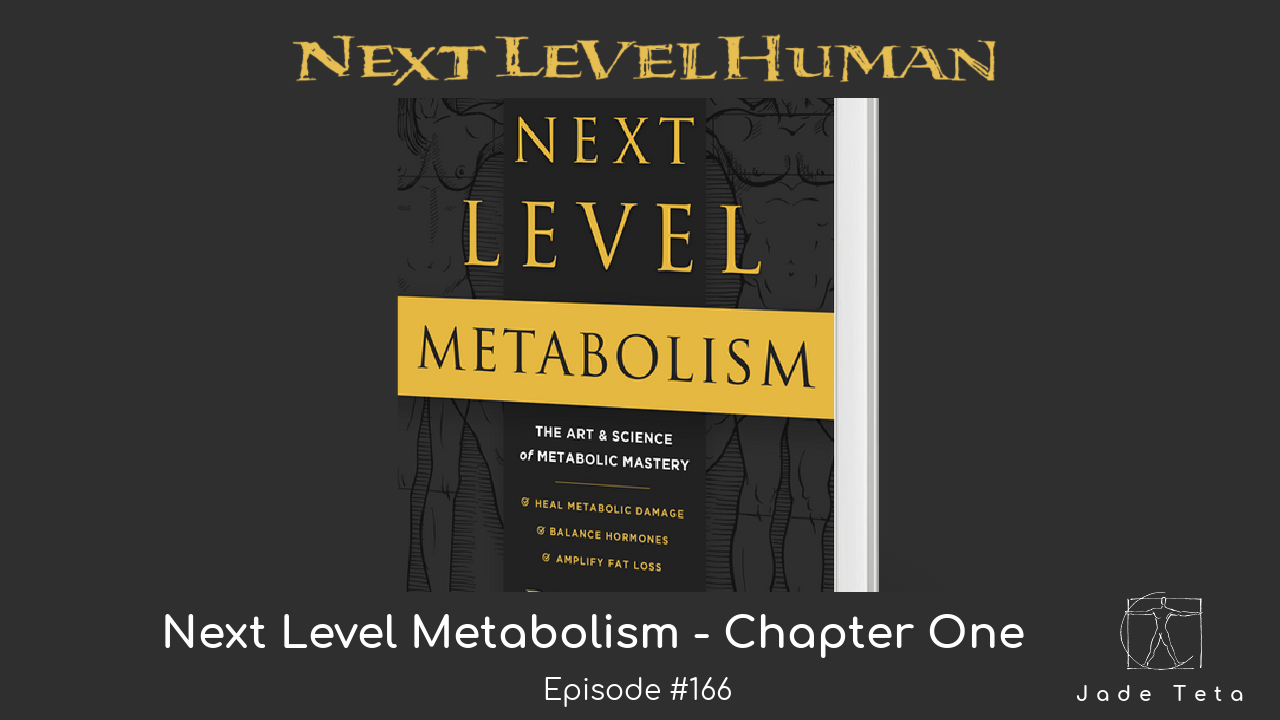 Next Level Metabolism Chapter One – Ep. 166

In this special episode, Dr. Jade shares with the Next Level Human Podcast listeners the first chapter of his upcoming book ‘Next Level Metabolism’. You will listen to the audible version of Chapter One and find out everything you need to know in order to comprehend metabolism and how it can work for you. Oftentimes seen as something hard to understand, metabolism can actually help you reach your goals in a smart way.

It’s important to know that if you are not getting results when it comes to your weight loss (or weight gain) journey is because you are missing something that needs to be addressed. At this moment, metabolism comes into place and that’s why it’s fundamental to know more about this topic. Also, it’s always good to remember that everyone is different and, as Dr. Jade points out in the episode, what works for others won’t always work for you.

Episode Intro: [01:18] welcome to today's episode, everyone a little something different for you today, I just finished recording the audio book version of next level metabolism for Audible. I don't know how many of you are audio book enthusiast I certainly am someone who over the last five years has read almost all of my books, if not all of my books via audio book. It just allows me to walk and listen and I enjoy audio books more than I ever thought I would. And so I began to record my books in audible format or audio book format. And so this particular episode is going to be chapter one out of the next level metabolism audio book. And that is scheduled to be released on Audible in the next two weeks or so. So somewhere between probably around June 7, to June 14, you'll see that book become available on Audible but for now you can enjoy chapter one for this week's episode of the next level human podcast. I hope you enjoy it. And I will see you next week for a new episode. Enjoy the next level metabolism chapter one read.

[02:43] chapter one, the new science of metabolism. There's one complaint I have become nearly sick of hearing. People say it all the time. You likely hear it too if you work in the health and wellness field. Maybe it's something you've said to yourself again and again your frustration building every time the thought magnet your mind. The most common gripe among people trying and failing to lose weight is I'm doing everything right but I'm still not getting results. As tempting as it might be to use a claim like this to absolve ourselves of any blame for our lack of progress. The truth is simple. If you're doing everything right and not getting results, then you're not doing everything right. Most likely, the reason you're not doing everything right is that you're outsourcing your metabolism to other people. You're expecting your favorite podcaster, or the latest diet book, or some guy named Jay to give you a one size fits all solution to making your metabolism yield to your wants. You think you can do the same thing your friend did and get the same results. You're treating your metabolism like a video game, you can turn on whenever you want and play on your terms. That's not how any of this works. By denying you any real results. Your metabolism is basically grabbing you by the shirt collar and screaming, you better figure me out because if you don't, there is no way I'm ever going to work with you. The new science of metabolism is rooted in the idea that everyone is uniquely different. No two people have the same metabolism working in exactly the same way. Therefore, no two people are going to get results from the same single approach. Furthermore, each person's metabolism always has a reason for doing whatever it is doing at any given moment in time. It never acts randomly. It's never unprovoked. And if it seems as if your metabolism is acting against you rather than with you, I can promise you it is also desperately trying to tell you why. Your metabolism is always talking to you. But before you can ever begin to interpret its message you first have to understand it's a language. The metabolism doesn't speak English. It speaks metabolism. If you hope to understand it If you're going to need to learn how to hear it. When it comes to deciphering the language of metabolism, you need to become acquainted with the three rules governing its behavior. I call them the three laws of metabolism.

[18:58] My theory is the short intense exercise focused on weight training over cardio may suffer less of this constrained response because it is less stressful, less stressful because it packs a large volume of exercise into a short period of time and therefore reduces the overall time spent exercising. Given that we know short lived stresses are generally better tolerated by the body. This makes sense. We won't know for sure until those studies are actually done. The final and perhaps most damaging aspect of metabolic compensation occurs in relation to hunger, energy and cravings, or what I call HEC, pronounced HEC dieting causes HEC to go out of check as you die by eating less and exercising more. The metabolism circumvents your efforts by ramping up hunger making energy unstable and unpredictable and inducing cravings for highly palatable calorie dense foods. If you have ever tried to willpower your way through a diet given into cravings and or had a cheat meal turn into a cheat month. You have seen this heck effect firsthand. The reductions in resting energy use daily activity, exercise motivation and energy burn, as well as unrelenting hunger and cravings are what you are up against. You can't win a battle of wills against your metabolism. The more you die at using the more traditional e l e m approach, the more rigid and stuck your metabolism can become. Understanding all the aspects of metabolic compensation is a critical first step in keeping the metabolism flexible and responsive.

[24:34] and let's get back to the show. Metabolic multitasking if that last bit of reading was depressing for you, this part should provide you with a little bit of hope. Another aspect of metabolism is that it is not a good multitasker. It either likes to be building muscle and fat nationalism, or burning fat and muscle catabolism it can do both but it's the metabolic equivalent of patting your head and rubbing your time For me, it takes monumental focus and a lot of time to practice. This simple fact explains why most people looking for body change end up in a position they did not intend to be in. Someone goes on a running program and cuts calories way back. As a result, they burn fat but burn a lot of muscle too. They end up thinner and flabbier what many refer to as the skinny fat look. Someone else eats a ton of protein and does nothing but weight training they end up gaining muscle and don't lose the fat or even gained some. This is the muscle fat appearance and is a major complaint of females who have been advised to follow diet and eating advice reserved for average male bodybuilders. These women are told it's impossible for them to bulk up. But building muscle under a layer of fat you are not burning or even gaining is like putting a jacket on top of two sweaters, you're going to look bulky. In order to avoid the skinny fat and muscle fast scenarios, you need to understand all four metabolic states. I will get into more detail on each toggle in coming chapters. But for now, you need to know metabolism doesn't simply come down to being either a couch potato or a constant dieter, eating less and exercising more is the dieters toggle, whereas eating more and exercising less is the couch potato. One of these metabolic States leads to being skinny fat and the other to muscle fat. To escape these metabolic outcomes, you need to learn to eat less and exercise less like a hunter gatherer or eat more and exercise more like an athlete. These two metabolic states keep the metabolism more flexible by teaching it to be a better multitasker. A flexible metabolism is able to change and adjust to different metabolic realities. Understanding these different metabolic toggles is going to be a huge part of your metabolic detective work moving forward, and we will dive deeper into each in the coming chapters.

[50:49] Again, this entire process has to be highly individualized, you must understand the three laws so you can know what your unique metabolism is doing and why you have to understand the four P's and the four M's because if you're going to build your own approach to taking your metabolism to the next level, you have to know what areas need your attention and understand that your plan will not mirror anyone elses. There's an old saying that if all you have is a hammer, everything starts to look like a nail. This hits the nail on the head pun intended when it comes to explaining what's going on in the mind of the dieter to truly master your metabolism, you have to stop being a dieter and start being a detective.