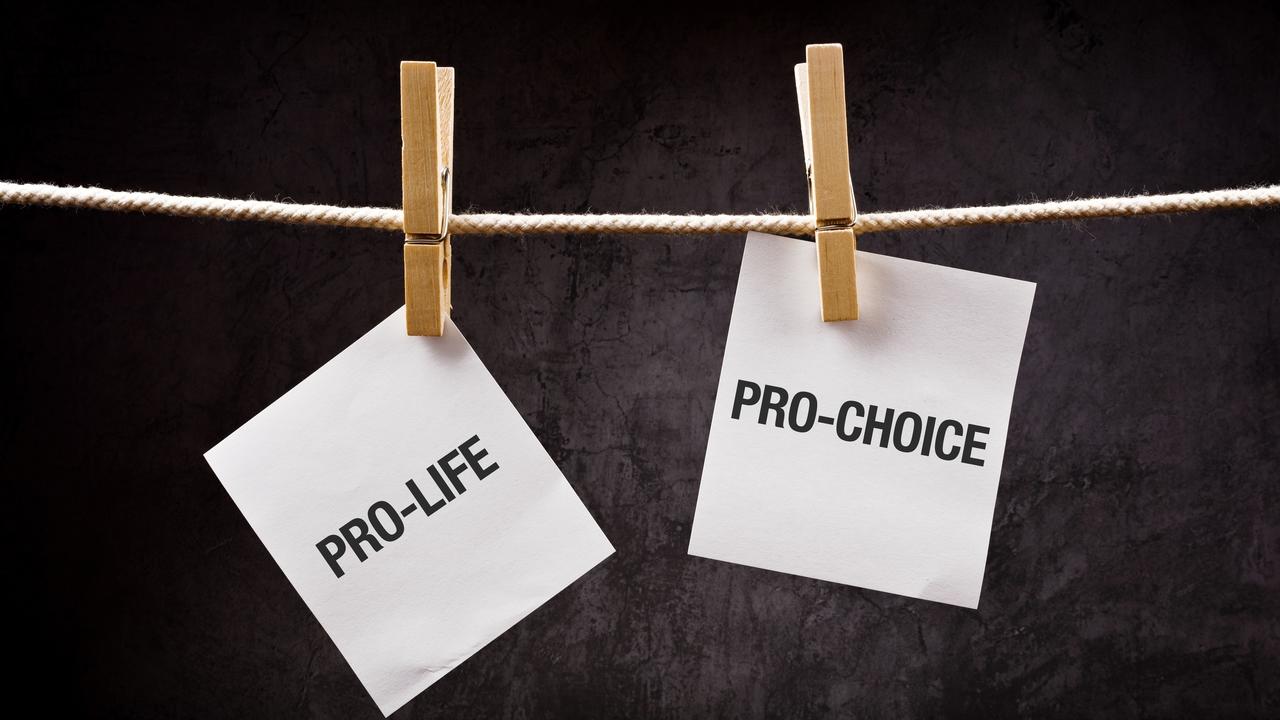 Is A Next Level Human Pro-Life or Pro-Choice?

My closest friends & I are always debating, thinking and discussing. When we see a charged social issue start flooding the media, we try to ask questions rather than make judgements.

So, when the latest debate on abortion exploded I was not surprised to get a text from a friend; “jade, is a Next Level Human pro life or pro choice?”

The text came along with a winky-face emoji that teased they already knew my answer.

My friends know I study, read, think, eat, breathe and sleep this stuff. My world is about helping people do the 4 human jobs at their highest level possible. Those jobs are:

Some people, believe it or not, could care less about this abortion “issue.” Others want to steer as far away from it, and other “political discussions” as they can. They subscribe to the idea that we should not talk about politics.

A Next Level Human loves political discussions because they are a perfect canvas for painting & refining purpose & meaning. These discussions are how we ultimately understand the values of our fellow humans. They provide a window into how we might grow ourselves, and the world, in more positive directions.

Let me stop here for a moment to clarify something. I am a human in process, just like you. I am doing my best to grow, learn and get better. I know very little compared to what I could know. I am no better than you. That’s why I call it a Next Level Human & not a Higher Level Human.

If you watch social media during a time like this you will immediately see the level people are operating from. Base Level & Culture Level Humans are black & white in their thinking.

Base Level types stake out a side & they go to war. It is sometimes hard to spot as they can come across as pleasant & well-meaning. The tell-tale sign is the black & white positioning. There is also self-righteousness; either overt or hidden. The way they adopt that subtle, uppity swagger tells you a lot.

It’s clear to Base Level types that they alone are the most sensible, intelligent, well-read and informed on the subject. These Base Level types are extremely common. They occupy the political left & right.

Culture Level types are also extreme in their thinking. The difference is they derive their positions from their peers. They are clearly on a team. They have read all the latest books on historical white domination of minorities. Or they evoke the Bible or God.

They tag their favorite leaders & champions of their point of view. They repeat the same talking points other members of their tribe champion. Oh, and they are clearly smarter than you. Their credentials as a doctor, a pastor or a past volunteer in an underprivileged part of town make that clear.

Culture Level types are also the most likely to say nothing. They are just as likely to nod their head in agreement with whoever is talking. This is because they want to be accepted and sometimes that means not ruffling feathers. They want to keep the peace and would prefer we all just “get along.”

Culture Level types are all about fitting in. If they are around boisterous team members, they may be outspoken too. If they are not, they will keep quiet and hope it all goes away.

The psychologist Jonathan Haidt describes the feeling side of the brain as an elephant. Once an elephant gets triggered it is going to be near impossible to stop it.

The other side of the brain is the thinking brain. This is described as a rider perched on top of the elephant. The rider tries to direct the elephant.

The rider has the brains and the elephant has the braun. You can tell very clearly which side of the brain people are acting from.  A person who gets loud, triggered and makes their entire goal winning is like the elephant. They are operating from their inner-brat child.

A person who is all thinking, facts and figures will constantly throw out logic, statistics, numbers and charts. They are operating from their inner teenager, trying to prove they are better looking, smarter and wiser.

Base Level types are mostly in the feeling brain. They are like a bull in a China shop.  They are going to win no matter what, even if it means attacking you directly rather than your position.

Culture Level types are often bouncing back and forth between the thinking brain and the feeling brain but never merging the two. Watch any teenager in puberty vacillating back & forth between childish temper-tantrums and adult-sounding logic and you have an idea what I am saying. They can’t integrate the two brains.

A Next Level Human is a skilled rider. They use logic and reason, but also realize that only gets them so far, especially in discussions with others. Therefore they also use the force of emotion to guide them to more self-reflection & motivated learning.

Here’s an example. Let’s say you are tying to lose weight. You pass a donut shop.  Your emotional elephant starts heading in that direction. Your logical rider sees this and gently says to the elephant, I am hungry too. I don’t blame you for being hungry. What do you say we go get one of those salads you love? Bam!!  Win-Win.

Is a Next Level Human Pro choice or Pro Life?

The Next Level Human is going to have his elephant register a strong opinion in either direction.  But then the rider is going to say, “yeah I can see how that will get you fired up. Makes me mad too. But, you do realize those are false dichotomies right?”

Now the elephant has been rewarded and acknowledged, and can now be emotionally curious instead of triggered. The rider goes on, “Yeah, think about it. Forget about abortion for a second. Aren’t you pro-life? I don’t see you going out of your way to step on people and kill them, that would make you a psychopath. And aren’t you pro-choice? Don’t you like the ability to choose? I have never seen you try to take anyone's choices away?”

The elephant nods. “Yes,” they say. “I am pro-life and I am pro-choice. I am both. And now I am pissed off that we have fallen for such ridiculous black and white labels.”

The rider replies. “Well, maybe that IS a better thing to get upset about? I am pro-life and pro-choice as well? There is a reason they don’t call it anti-woman and anti-baby, because no normal moral person would be either of those things.”

Now, the emotional brain has something more accurate to be pissed about and the rational brain is in agreement.

This is how the Next Level Human thinks. He or she does not look to win and does not try to virtue signal their team members. They simply look for a more accurate truth and hope to learn something.

But what about legislation?

The question of legislating one’s beliefs is a different issue. Base Level types think their way is the only true way. They will have no issues making their beliefs law. They want to slam it down your throat and make you choke on it.

Culture Level types go with the crowd. They wait to see what the consensus is. In a lot of ways they are not that convicted either way.

The Next Level Human thinks two things. First they think, “my beliefs are my beliefs and there are infinite number of other, potentially valuable, beliefs out there.” Second they think, “what helps the greatest numbers of people, hurts the least & stays true to higher moral values like life, liberty and the pursuit of happiness?”

In this case they may deem, “this is best left out of the hands government. Government is about protecting freedoms not taking them. These things should not be legislated into law.” Here they are deferring to a more universal value that tries to merge both freedom, empathy and logic.

Or, perhaps they feel that adoption is a great solution so long as the individual’s impacted by the policy are supported, protected and served by the same law. For example, perhaps they think, “sure carry the baby to term and let’s cover the cost of your medical bills, labor and make all the arrangements for adoption in a way that serves you, protects the baby and eliminates the financial burden or any future cost to society.” The emotional and rational brain is attempting to integrate. Here again there is a stance of being pro-baby and pro-woman. It’s about empathy, fairness and reason.

Or it may be that their emotional brain is staunchly pro-life, but their thinking brain can see all the possible repercussions of superseding an individuals right to choose. I forget which politician said it, but a statement like…. I hate abortions. No one wants more abortions, but the best thing for all people is to make them “safe, legal and rare." That’s a nuanced, empathetic and rational approach to a complicated issue.

Black and white thinking may be easier, but it is far messier and less accurate in the long-run. If your objections are about black and white you have gone Base and Culture Level. If instead they are about thinking in the grey, you are being next level.  Grey-zone thinking is less expedient, but it is nearly always the best and truest approach.

They think, “ok, I am going to assume you are a good human and probably have sensible reasons for your position and point of view. So long as you are not pushing that belief on the rest of us or hurting others, I will remain open to your thoughts and try to learn from you.”

In other words, Next Level Humans are not on the pro-life or pro-choice teams, they are on #teamhuman.